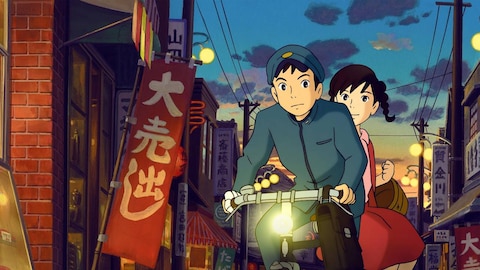 From the legendary Studio Ghibli, creators of Spirited Away, Howl's Moving Castle and The Secret World of Arrietty, comes another animated triumph. Yokohama, 1963. Japan is picking itself up from the devastation of World War II and preparing to host the Olympics. Against this backdrop of hope and change, a friendship begins to blossom between high school students Umi (Sarah Bolger) and Shun (Anton Yelchin) - but a buried secret from their past emerges to cast a shadow on the future and pull them apart. From a screenplay by Academy Award winner Hayao Miyazaki and featuring the voices of Gillian Anderson, Sarah Bolger, Beau Bridges, Jamie Lee Curtis, Bruce Dern, Isabelle Fuhrman, Christina Hendricks, Ron Howard, Chris Noth, Emily Osment, Aubrey Plaza, Charlie Saxton, Alex Wolff and Anton Yelchin.