Let Them All Talk tells the story of a celebrated author (Meryl Streep) who takes a journey with some old friends (Candice Bergen and Dianne Wiest) to have some fun and heal old wounds. Her nephew (Lucas Hedges) comes along to wrangle the ladies and her literary agent (Gemma Chan) also books herself on the trip. 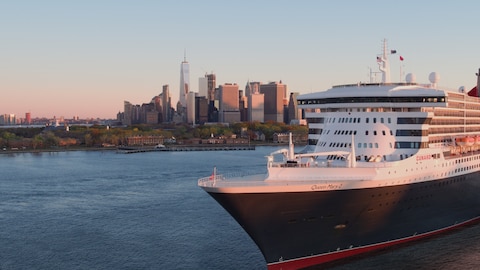 Cunard’s flagship Queen Mary 2 plays a central role in “Let Them All Talk,” sailing the characters in style amidst luxurious surroundings as they voyage from New York to England. 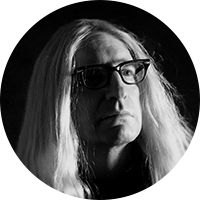 Steven Soderbergh is a writer, director, producer, cinematographer and editor. He most recently directed the films The Laundromat and High Flying Bird, both of which debuted on Netflix in 2019. He earned the Academy Award® in 2000 for directing Traffic, the same year he was nominated for Erin Brockovich. Soderbergh earlier gained an Academy Award® nomination for Best Original Screenplay for Sex, Lies, and Videotape, his feature film directorial debut. The film also won the Palme d’Or at the 1989 Cannes Film Festival.

Among his other credits are the HBO limited series Mosaic, the television series The Knick for Cinemax, and the films Unsane, Logan Lucky, Side Effects, Magic Mike, Haywire, Contagion, And Everything is Going Fine, The Girlfriend Experience, The Informant!, Che, the Ocean’s trilogy, The Good German, Bubble, Equilibrium, Solaris, Full Frontal, The Limey, Out of Sight, Gray’s Anatomy, Schizopolis, The Underneath, King of the Hill and Kafka. His television film Behind the Candelabra, for which he won a 2013 Emmy® Award for Outstanding Directing, debuted on HBO in May of that year. 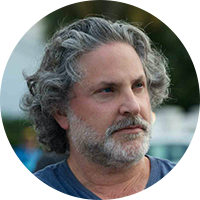 Gregory Jacobs is a film and television producer, writer and director.  He previously produced The Laundromat for Netflix, as well as the series Now Apocalypse for Starz and the Cinemax series The Knick. Films include Logan Lucky, Edge of Tomorrow, Behind The Candelabra, Side Effects, Magic Mike, Contagion, Haywire, The Informant!, The Ocean's Movies, Che and The Girlfriend Experience.  Jacobs made his directorial debut with Criminal, subsequently directing Wind Chill, Magic Mike XXL and Tom Papa's Netflix comedy special, You're Doing Great.  Jacobs also co-created, wrote and executive-produced Red Oaks for Amazon Prime. 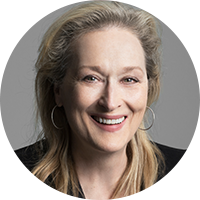 For over 40 years, Meryl Streep continues to bring a varied and vivid array of characters to life in a career that has cut its own unique path from the theatre through film and television. Ms. Streep began her professional life on the New York stage, where she quickly established her signature versatility and verve as an actor. Within three years of receiving her MFA with Honors from Yale University, she made her Broadway debut, won an Emmy® for Holocaust, and received her first Oscar® nomination for The Deer Hunter. She has since won three Academy Awards, and in 2018, in a record that is unsurpassed, she earned her 21st Academy Award® nomination for her role as Katherine Graham in The Post.

She has also pursued her interest in the environment through her work with Mothers and Others, as well as lends her efforts to Women for Women International, the Committee to Protect Journalists, Donor Direct Action, Women in the World Foundation and Partners in Health. Ms. Streep is a member of the American Academy of Arts and Letters and has been accorded a Commandeur de L’Ordre des Arts et Lettres. She has also received a Kennedy Center Honor, the National Medal of Arts and the Presidential Medal of Freedom from President Obama. 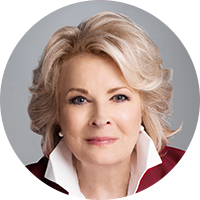 Candice Bergen shined as the feisty eponymous broadcast news legend of the critically acclaimed CBS comedy series Murphy Brown, for which she received five Emmy® Awards and two Golden Globe® Awards over the 10-year run. She served as an executive producer when she returned to that iconic role in the CBS revival in the fall of 2018.   She starred that same year in the box office hit The Book Club alongside Jane Fonda, Diane Keaton and Mary Steenburgen.

Film credits include Starting Over, for which she received an Academy Award® nomination for Best Supporting Actress, Gandhi, Rich and Famous, Home Again, Sweet Home Alabama and Miss Congeniality among many others. Additional television credits include Boston Legal, which garnered her two Emmy® and both a Golden Globe® and SAG® nomination. Broadway credits include the original production of Hurly Burly, Gore Vidal’s 2012 production of The Best Man and Love Letters opposite Alan Alda.

Bergen’s autobiography, Knock Wood, was released in 1984 to critical acclaim and became a New York Times bestseller, as did its sequel, A Fine Romance published in 2015. In 2017, Candice created Bergen Bags, a personal customization business for which she hand paints renderings of beloved images onto handbags. All proceeds are donated to charity. 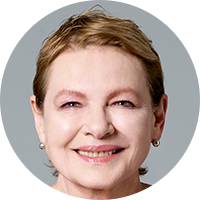 Oscar® and Emmy® Award-Winning actress, Dianne Wiest can next be seen in J Blakeson’s I Care A Lot, with Rosamund Pike and Peter Dinklage. Ms. Wiest stars opposite Clint Eastwood in Warner Brothers’ The Mule, which premiered in December 2018.  She can also be seen in Five Nights in Maine, in which she stars opposite David Oyelowo. She was seen in The Humbling opposite Al Pacino and directed by Barry Levinson and was also in Universal’s Sisters directed by Jason Moore and starring Tina Fey and Amy Poehler. On the television side, she also starred in the CBS hit comedy Life in Pieces.

Additionally, over the years Ms. Wiest has given memorable performances in films such as Charlie Kaufman’s Synecdoche, New York,  A Guide to Recognizing Your Saints, Hannah and Her Sisters (Oscar®), The Purple Rose of Cairo, Radio Days, September, Bullets Over Broadway (Oscar®),Parenthood (Oscar® nomination), Rabbit Hole, Footloose, Edward Scissorhands and The Birdcage. Ms. Wiest also received Emmys for her performances in The Road to Avonlea and in the HBO series In Treatment.

In the spring of 2018, Ms. Wiest performed in Yale Repertory’s production of Happy Days, at the Theatre for a New Audience in Brooklyn. She was also recently in The New Group’s production of Rasheeda Speaking directed by Cynthia Nixon; before that in The Cherry Orchard at Classic Stage Company; and Arthur Miller’s All My Sons on Broadway. Other New York theater appearances include The Seagull, Third, Memory House, Salome and Oedipuswith Al Pacino, The Shawl, Hunting Cockroaches, After the Fall, Beyond Therapy and The Art of Dining. 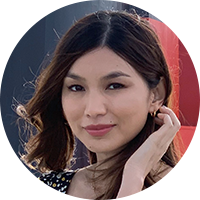 Gemma Chan first came to prominence with her role in the BAFTA-nominated Channel 4/AMC artificial intelligence drama Humans. The first series was Channel 4’s biggest original drama hit for 20 years, and the second series was Channel 4’s highest rating returning drama launch since 2012. She has also starred in some of Britain’s best loved television including Doctor Who, The IT Crowd, Sherlock, Secret Diary of A Call Girl and Fresh Meat.

Summer 2018 marked Gemma’s graduation from leading British TV actress to Hollywood film star. Chan starred alongside Michelle Yeoh, Constance Wu, Henry Golding, Awkwafina and Ken Jeong in the Warner Bros’ film adaptation of Kevin Kwan’s best-selling novel, Crazy Rich Asians. The film is the highest-grossing Hollywood studio romantic comedy since 2009 garnering more than $235 million since its release. Chan portrayed chic it-girl, “Astrid,” who despite having lived a charmed and wealthy life, has growing concerns about her marital life. Gemma was widely praised for her performance in the film, with The Hollywood Reporter commenting, “Chan is a radiant presence who lights up her every scene”. Crazy Rich Asians won Best Comedy at the Critics Choice Awards and the film was also nominated for a Golden Globe® (Best Motion Picture - Musical or Comedy) and SAG Award® (Outstanding Performance by a Cast in a Motion Picture).

Gemma was next seen playing Bess of Hardwick in Josie Rourke’s film debut, Mary Queen of Scots. The film received its world premiere on the closing night of the AFI Film Festival 2018.

Following this, Gemma returned to British television in the I Am anthology drama series for Channel 4, from BAFTA winning writer-director Dominic Savage. I Am Hannah told a deeply moving story which explored the societal pressure women face to have children. Gemma received rave reviews for her performance. The Guardian said, “Gemma Chan gives her most impressive performance to date”.

She will return to the Marvel Cinematic Universe in Eternals releasing November 2021. She will lead an ensemble cast including Richard Madden, Angelina Jolie, Salma Hayek and Kit Harington where she will play the humankind-loving “Sersi.”

Chan is also an accomplished theatre actress, performing in the sell-out run of the critically acclaimed Yellow Face, by Tony Award winning David Henry Hwang at the Park Theatre and again in the National Theatre’s revival. In 2015, she starred in Harold Pinter’s The Homecoming at Trafalgar Studios. 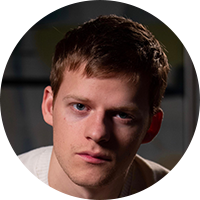 Academy Award® and Golden Globe®-nominee Lucas Hedges was most recently seen in French Exit directed by Azazel Jacobs, opposite Michelle Pfeiffer, which premiered at the Tribeca Film Festival this year. The film will be released by Sony Pictures Classics in 2021. Hedges was most recently seen in Honey Boy, directed by Alma Har'el, opposite Shia LaBeouf which opened in theaters last fall. In 2019 he also starred in A24’s Waves, written and directed by Trey Edward Shults. Hedges’ other credits include Joel Edgerton’s Boy Erased for Focus Features, Peter Hedges’ Ben is Back and Jonah Hill’s directorial debut Mid 90’s. Hedges is perhaps best known for his turn opposite Casey Affleck in Kenneth Lonergan’s Academy Award®-winning Manchester By the Sea. For his performance, Hedges was nominated for an Academy Award® for Best Supporting Actor, among others.